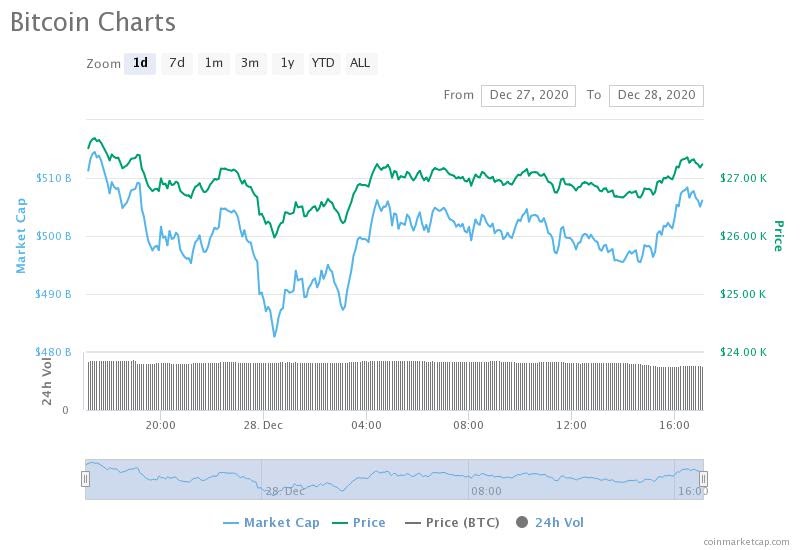 Remember when BTC $20,000 was a bull target? (Photo: CoinMarketCap)

Bitcoin looks bullish like never before as it begins its last week of 2020—what’s in store for the largest cryptocurrency and crypto market?

With $20,000 now seeming more like a crash target than a bullish one, Modern Consensus takes a look at what to expect in the coming few days. We also publish a weekly markets roundup every Friday, the latest edition of which can be found here.

After a celebratory Christmas for many hodlers, Bitcoin kept climbing over the weekend to top out at an astonishing $28,400—weekly gains of 25%.

Thousand-dollar daily advances became almost routine as resistance failed to materialize and sell walls disintegrated one after another. The moves only came to an end once BTC/USD passed a strengthening sell wall at $28,000, only to spark huge volatility with a swift drop to $26,500.

As ever, a bounceback began a more focused trading period which has lasted into Monday. At press time, Bitcoin traded at $27,300, having climbed back from overnight lows of $25,900.

In trading circles, the mood remains overwhelmingly bullish. For popular trader Scott Melker, even if Bitcoin were to see a dramatic retracement, it would only be as a final test of $20,000 as support.

“A drop to 20k to retest the former all time high as support would terrify many, when that price was a dream two weeks ago,” he noted on the fickle nature of Bitcoin market sentiment during volatile periods.

Zooming out, opinion firmly tends towards Bitcoin only getting started at current levels and that 2021 will provide unimaginable upside.

“$BTC is advancing in parabolic move from Sep ’20 low,” veteran trader Peter Brandt said in an assessment on Sunday.

“I expect this curve to be violated at some point, but not to produce 80% decline. Green curve is a larger parabolic advance from Dec 2018 & Mar 2020 lows. This is the driver of bull market.”

As such, the idea that 2020 is nothing like Bitcoin’s previous bull runs continues to be reinforced, as institutional money frontruns retail interest which is still to appear.

Waiting for even bigger money

“Bitcoin’s price going up is going to attract a lot of demand,” researcher Pierre Rochard summarized in a characteristically neat tweet.

For Dan Held of U.S. exchange Kraken, meanwhile, 2020 performance suggests that Bitcoin is in a whole new form of bull run, something he dubs a “supercycle.”

“This time is different: COVID, Gold 2.0 narrative, institutional herd, and ease of use have set a new stage. Instead of a normal bull/bear cycle, Bitcoin would break convention and enter a ‘Supercycle,’” he began in a series of tweets over the weekend.

Like others such as “The Bitcoin Standard” author Saifedean Ammous, Held believes that it is legacy institutional money which will provide the real price turning point.

“What happens when part of the $100T managed by institutions flows into Bitcoin to preserve wealth?” he concluded.

Projections for 2021 price performance meanwhile lack hard-and-fast numbers, as Bitcoin has practically reached many of them already. Among these is RT host Max Keiser’s long-forecast $28,000, a level considered fully out of reach even weeks ago.

Supporting a short-term price drop meanwhile is the CME Bitcoin futures market, which opened a full $3,000 higher than the level at which it closed on Friday.

The resulting “gap” is the largest on record and joins two others of more than $1,000 which have opened in the past month.

Should it follow historical precedent, BTC/USD will fall to “fill” these gaps with the spot market, providing the opportunity for a buy-in as low as $16,900. Sentiment seems to prefer a less substantial drop under current circumstances, but a correction is nonetheless firmly on the cards for seasoned market participants.

“May or may not close,” well-known Twitter trader Squeeze commented.

“We have a $9.7k gap that’s never gonna get filled. But I reckon this 23k one will be filled eventually.”