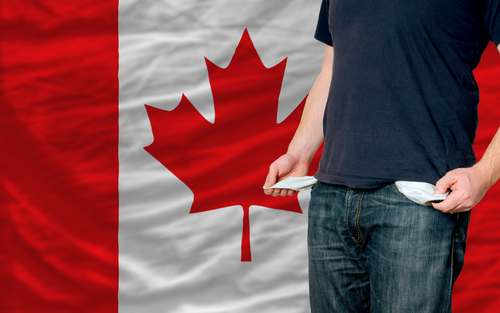 Photo of an actual QuadrigaCX customer standing next to a Canadian flag (via Shutterstock).

Cryptocurrency exchange QuadrigaCX has barely 10% of its depositors’ money, and it’s probably not worth looking for the rest.

That is what of auditing and advisory giant Ernst & Young Inc. told the Supreme Court of Nova Scotia in its role as trustee of the firm’s bankruptcy on May 1. It will be too long and costly, and some other exchanges and payment processing firms are not cooperating, it said.

QuadrigaCX imploded shortly after founder Gerald Cotton was reported to have died suddenly in India on December 9, 2018. At first, his widow said that the $180 million in various cryptocurrencies held in the firm’s wallets had been lost as Cotton died without giving anyone else the keys to those wallets.

In total, exchange’s 76,319 customers had deposited digital currencies worth about $160 million ($214.6 million Canadian).

The firm was supposed to have digital assets including Bitcoin, Bitcoin Cash, Bitcoin Gold, Litecoin and Ethereum worth that in its digital vaults. But, those reportedly inaccessible wallets are virtually empty, Ernst & Young-supplied bankruptcy trustee George Kinsman found.

There is, in the cold language of auditors, “a material discrepancy between the reported fiat and crypto currency obligations due to the Estates’ creditors and the Estates’ known assets.”

Translated, that comes very close to an allegation of fraud or theft.

One big question unaddressed in the report is the full ownership of QuadrigaCX’s various parent companies, as Cotton was apparently not the majority owner.

Cotton was the CEO and sole director of Fintech and his estate owns 41% of the company, the report said. The report does not address who owns the rest. But, it did say the British Columbia Securities Commission halted trading in Fintech’s stock in 2016.

In March, Bloomberg reported that Cotten’s co-founder, Michael Patryn, was actually Omar Dhanani, who had legally changed his name several times after being deported to Canada by the U.S., where he served jail time for crimes ranging from credit and bank card fraud to burglary. Patryn told Bloomberg he left the company after a dispute with Cotton in 2016 and has not been involved with it since.

But, Canada’s Globe and Mail (paywall) newspaper reported in February that Patryn and his partner, Lovie Horner, are two of QuadrigaCX’s biggest shareholders.

What is left for QuadrigaCX customers?

Kinsman said he has only managed to lay its hands on $16 million ($21.5 million Canadian)—amounting to 10% of the funds QuadrigaCX claimed to have. That was in assets frozen in a payment dispute by Costodian, Inc., a Canadian third party payment processor QuadrigaCX worked with.

There is an additional $5.4 million (this and other amounts below are reported in US. dollars) listed as assets. But, other than about $372,000 in accessible cryptocurrencies, and $189,000 held by one of QuadrigaCX’s parent companies, none of this is in cash and may not be recoverable.

Cotton’s estate is tentatively estimated to be about $8.9 million. His widow, Jennifer Robertson, has agreed to have that frozen, as Ernst & Young found evidence that Cotton may have used company funds for private purchases.

As for tracking down that crypto, what Kinsman advised the court is, “[a] complete and fulsome review of Quadriga’s financial affairs will take considerable time and effort to pursue and may not be possible or cost effective to complete given the lack of available information, the volume of transactions processed and the number of [third party payment processors] and cryptocurrency exchanges involved, many of whom to date, have not fully cooperated with the Monitors investigation.”

Other problems included, “the lack of individuals having institutional knowledge of the operations, the limited books and records available to review, [and] no Company controlled bank accounts,” Kinsman reported.