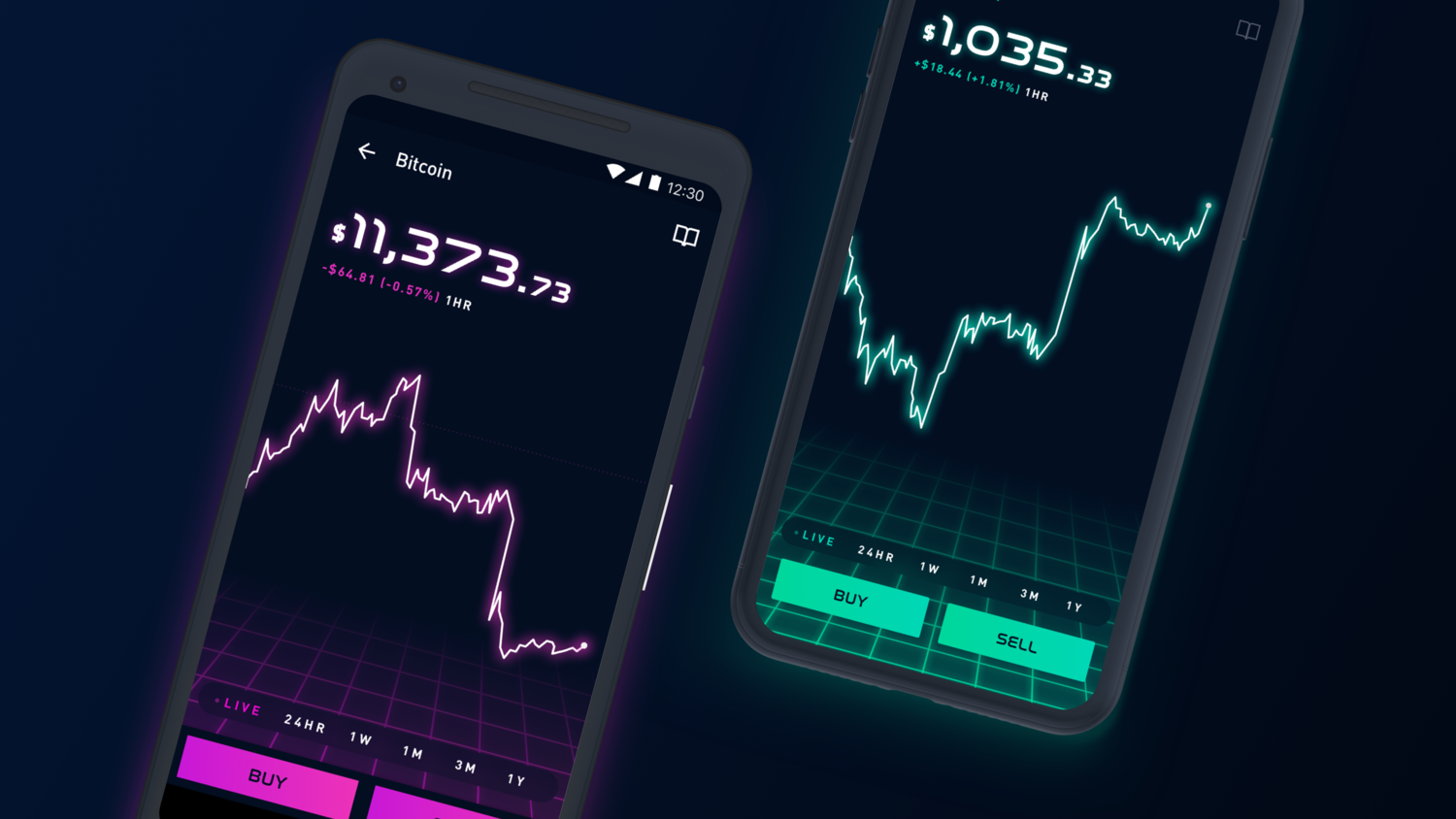 On Monday, popular stock app Robinhood rolled out zero-fee crypto trades for users in California, Massachusetts, Missouri, and Montana, with other states to follow. Just announcing that they would do something like this sent Robinhood’s valuation well over $5 billion. Users in those states can invest in 16 cryptocurrencies, including popular names like bitcoin, ether, Bitcoin Cash, Litecoin, and Ripple’s XRP. And Robinhood also has some lesser-known coins like Zcash, Monero, Dash, and even the semi-serious Dogecoin.

TechCrunch called it the “Coinbase-killer” but we are wary of the entire platform. Robinhood joins Abra and Uphold in the “invest in” crypto bandwagon. They want you to have an easy way to buy crypto and then sell it for more money down the road. The only thing these platforms add to the crypto community is more volatility. Hooray!

These apps seem like no-brainers, but like a lot of things: in crypto, you very much get what you pay for.

Robinhood is a super simple app, so explaining its downsides is much more complicated. We’re just going to talk about the pros and cons as well as an exit strategy if you’ve tried the app and had enough.

Pros: Ease of use

Robinhood won the Apple Design Award in 2015, long before they dipped a toe into the crypto world. And you can see why.

The interface is fun, zippy and instead of remembering some convoluted password, you can unlock your account with a thumbprint or face ID. Pick a stock or crypto and swipe up to purchase.

It feels more like a game than a financial app. But with the weeks we’ve had recently, it would be useful to have a breezy app in your pocket to take advantage of the daily 5 percent swings.

“With the release of Robinhood Crypto, we’re continuing our mission of making the financial system work for everyone, not just the wealthy” Robinhood said on release. Trading fees on exchanges like Binance can make it difficult to earn any gains. For comparison, a traditional stock trading app like E*Trade would charge a fee of about $6.95, which would bar very small trades. A $100 trade wouldn’t be a wise move if the fees alone eat up 7 percent.

One thing that is hard to explain to crypto outsiders, however, is that this can be fun. Log in, place yer bets, catch a nice spike, cash out, and get a pizza like a dotcom daytrading badass.

Compare that 0 percent fee to a couple of other services:

Seems pretty cool, right? For most users, especially most first timers and casual users, that would be enough. Unfortunately the downside is so significant that we can’t really recommend this app.

O.K., so you bought some bitcoin. If you plan on becoming a HODLer, you can leave it alone. But now the problem comes down to the biggest fundamental of cryptocurrency: utility. The only thing you can do with cryptocurrency in Robinhood is look at it. At least on Abra, you can pay a network fee and send it to an external wallet.

Even when you click “buy bitcoin” you never really own it because Robinhood doesn’t have a wallet function and won’t give you the public key required to access it.

Modern Consensus reached out to Robinhood spokesperson Lavinia Chirico to get to the bottom of this problem. “Robinhood is an investment platform,” she said, adding her own italics in an email follow-up. “At this time, Robinhood Crypto does not support coin withdrawals, however, we plan to do so in the near future.”

The problem with comparing Robinhood to Coinbase and the rest is that you don’t actually buy any crypto here. You just get to claim their value in the app.

By keeping your cryptofunds out of the ecosystem, you can’t, for example, shore up a windfall in Tether or donate to a crowdfunding campaign that accepts ether. What makes the app difficult is that is looks like it solves one problem (week-long, high fee process of adding $10 in bitcoin to your coinbase account using your bank account) but then creates another.

So as of now and into the foreseeable future, you might get to watch your Robinhood funds grow, but you won’t be using them to buy any beef jerky with you Litecoin.

As of Thursday, April 5, Robinhood is only available in four states: California, Massachusetts, Missouri, and Montana.   Rolling it out in just these states is a little strange because months ago, Robinhood told users to sign up for their app to get in line for early access when they made crypto available. And they also encouraged those users to invite friends. But it appears that U.S. state banking regulations will decide who really gets in next.

Forty-nine out of 50 states require firms that accept money from your bank account to register as money transmitters. These states have a criss-cross and varying set of requirements. Montana is the only state that does not have money transmitter requirements, hence why it made the list. State regulations take a lot of legal muscle to prove compliance. Most states require a surety bond of anywhere between $25,000 to over $1 million.

Luckily for the Robinhood, their investors saw value in the venture. According to the Wall Street Journal, the company took on $350 million in funding with a new valuation at about $5.6 billion in March. Hitching one’s wagon to the blockchain star seems to be a winning strategy for many companies, even if the connection is tenuous. For example, in December, as Modern Consensus reported, Long Island Iced Tea Corp changed its name to Long Blockchain Corp and its stock price tripled.

Robinhood’s Tron-meets-Boiler-Room promo video features a guy heading into work at a trading company (in the middle of the night?), but everytime he turns his head, people around him don spacesuits and head “to the moon.” It’s a blatant attempt to induce FOMO.  Of course, most people watching aren’t yet Robinhood customers and even if they open up an account immediately after seeing the ad, crypto prices could easily go Apollo 1 instead of Apollo 11 (too soon?) by the time they’re able to start trading

However, the main object may be to increases their user base, thus increasing their company’s value. Whether they actually create any value for those users may be a secondary concern.

We’ve been hard on cloudbank apps before. But we can also see how the limits of these apps can provide a fee-free platform for casual users to learn about financial instruments. If a teenager spent her birthday money to buy $100 in Coinbase, she would end up paying a $3 fee. Then if her $97 gained 10% she would have about $106. 10% isn’t bad, but now she needs to pay Coinbase another $3 if she wants to pull her money out, leaving her with $103. When we spoke to Abra about their own app’s prices they freely admitted that they make their money by adjusting the buy and sell price the customer sees. When we asked Robinhood about this Chirico said, “Unfortunately, that’s all I can share at this time.” They’re also rolling out “Robinhood Feed,” a Venmo-like newsfeed where people can talk about what they bought and why they bought it. “Got my first crypto today!” “Today’s news should have a positive effect on BTC long term…” In the U.S., Australia, and many other countries, a person needs to be licensed or registered to give financial advice. The Feed helps Robinhood skirt this regulation. Robinhood wouldn’t be able to send out an email about how bitcoin is a great buy today, but you can listen to every Chicken Little on this app tell you why they’re doing what they’re doing.

Let’s say you decided to try out yourself. You put in $10 and now you’re sick of watching the markets bat it around. The upside is that you are able to hold a USD wallet in the app itself. You could take advantage of a spike in crypto prices and pull the money out. You’re free to go ahead and spend that money on a share of a given stock.

However users should beware: if you really do make some serious money on this app, your only choice is to pull out your money and pay the capital gains tax. The good news is that this is also fee-free so if you just want to get your money back, you can easily withdraw it to your bank account.

This may give you a taste for crypto and cause you to think you’re ready to join the big leagues on Binance. But while you’ve learned the ropes, you will have to start over again. That’s because, as we mentioned earlier, your Robinhood account doesn’t let you take ownership of actual cryptocurrencies like bitcoin. Instead, it’s an account that tracks the crypto. To move up to the real thing, you will need to put your fiat into an exchange like Coinbase or Bitstamp and then you might have to pay a network fee to get it into your Binance account.

It’s important to say that none of this is financial advice. We were able to try out the app and we got our ten bucks back in one piece. We wish this app had been around when we were in high school because it would have been fun to learn about investing when the stakes were lower. It’s easy to use, but the utility, availability, and trustworthiness of the network don’t measure up to what we need in a crypto platform.

EXCLUSIVE: Torossian’s 5W no longer working with Bitfinex or Tether