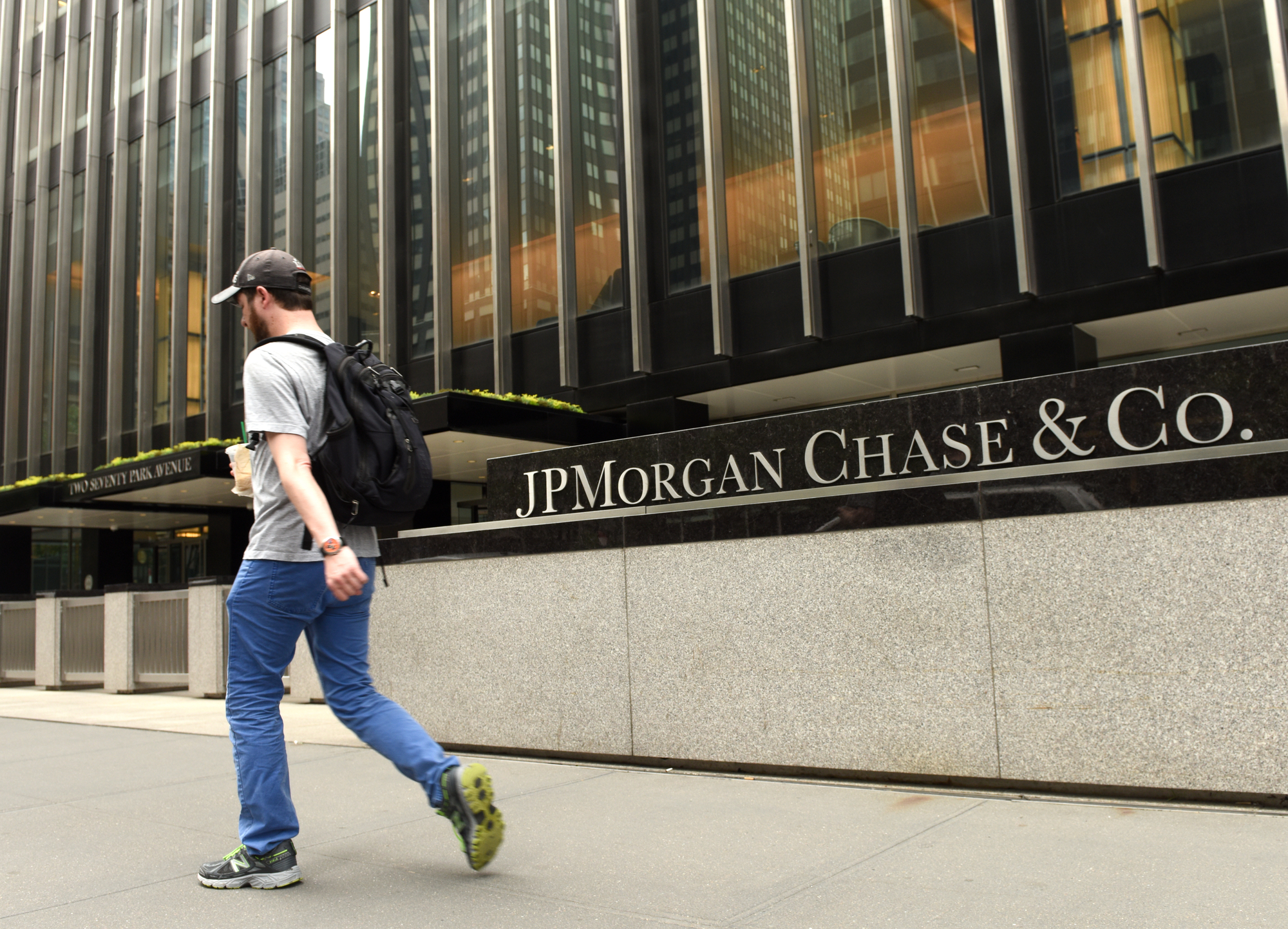 Very unsuspicious man walking with a backpack by JPMorgan Chase's headquarters (via Shutterstock).

JPMorgan’s February 14th announcement of its very own stablecoin, the JPM Coin, was a Valentine of sorts to the crypto and blockchain industries, demonstrating that mainstream acceptance of distributed ledger technology continues to move forward steadily despite the continued extreme price volatility of cryptocurrencies.

The fortuitous appearance of a member of JPMorgan’s Blockchain Strategy Team on the schedule for Columbia University’s LedgerFest conference on February 15th motivated us to duck out early from a different conference in midtown and make the trek up to Morningside Heights. February is the heart of university conference season, with countless events across a myriad of topics put on by and/or for university and graduate students, seemingly all on Fridays. LedgerFest was the first conference put on by engineering student Nir Kabessa and his team at the Blockchain at Columbia student group.

The JPMorgan representative was Matthew Austin, vice president of blockchain & digital-assets strategy. The format was a “fireside chat” (there’s actually never a fireplace and hopefully never a fire) with Alex Price, founding partner of Qu Capital, which describes itself as a quantitative investment manager that identifies and trades inefficiencies in the digital asset market. So, a quant fund for crypto? Possibly! But there’s not much publicly available information out there on Qu Capital, and we don’t know for sure.

Austin opened by explaining that his role at JPMorgan focuses both on enterprise blockchain and digital assets. Turning to the JPM Coin, he described it as a prototype of a digital coin for their institutional clients that is created and exists on JPMorgan’s Quorum permissioned ledger enterprise blockchain. It will be a stablecoin in that one JPM Coin will always have a value equal to one U.S. dollar.

JPMorgan’s institutional clients will “create” JPM Coins by depositing U.S. dollars into a special type of account at the bank and receiving an equivalent number of coins in return. Those newly created JPM coins can be used on the bank’s Quorum blockchain (and only there for now) for near instantaneous payments, movements of value, and securities transactions with other JPMorgan institutional clients. Finally, all JPM coins can be redeemed by clients at JPMorgan at any time for U.S. dollars.

This could be a big deal because the settlement of securities transactions for such things as stocks, bonds, and derivatives is still measured in days while for trade finance, it can be measured in weeks or even in months. We imagine that competitors in the securities processing and settlement space such as the Bank of New York Mellon and Citibank will be watching the introduction and evolution of the JPM Coin with interest and may have their own similar solutions on offer before too long.

Austin’s comments didn’t stray from the information that had been announced by JPMorgan the day before, and his answers to audience questions were mostly of the “no comment” variety, but he was able to add some color on a variety of issues even if prefaced by the statement that those were his opinions and not necessarily those of his employer.

Austin recounted a recent conference in New York City where the SEC stated that the Securities Act of 1933 and the Securities Exchange Act 1934 will apply to cryptocurrencies. He also brought up a comment from Jack Dorsey, CEO of both Square and Twitter, saying that it’s just a matter of time before the Lightning Network is integrated into Square Cash (now known as Cash App).

He was unsurprisingly bullish on the Ethereum enterprise ecosystem given that JPMorgan is a member. Austin also mentioned that financial institutions invested $1.7 billion in blockchain technology in 2017, and the amount for 2018 is almost certainly higher.

When it came to a question on the current crypto bear market, Austin emphasized that JPMorgan is focused on enterprise blockchain and doesn’t pay much attention to the price fluctuations of cryptocurrencies, but he remains bullish on the space.

Regarding bringing the JPM Coin to public blockchains, Austin offered another “No comment.” comment but did say that the main issues in doing so would be scalability, interoperability, and privacy. JPMorgan’s informational FAQ states the following: “The JPM Coin will be issued on Quorum Blockchain and subsequently extended to other platforms. JPM Coin will be operable on all standard Blockchain networks.”

While the JP Morgan talk was the timeliest, it was far from the only important discussion of the day. We arrived too late to see Gemini talk about cryptocurrency exchanges and custody solutions, Kadena present its hybrid public-private blockchain, or IBM discuss the recently announced Columbia-IBM Center for Blockchain and Data Transparency, but we did manage to catch the end of the Hedera Hashgraph overview of the new protocol and snap the photo just above. The Hadera Hashgraph platform is not built on blockchain technology but rather on a directed acyclic graph, which is supposed to allow for much faster transaction speeds than Bitcoin or Ethereum.

ConsenSys was on hand to give an overview of its operations in Brooklyn, but we felt the need to move next door to catch the concurrent presentation by a pair of Axoni engineers, Emily Yu and Josh Dillon, on building distributed ledger applications in financial institutions. Because this conference was geared towards students, several of the presentations like this one were able to get into the weeds to explain some important concepts rather than merely saying that a particular technology or company will be successful.

Yu and Dillon spent some time explaining the concept of a hash and how that relates to blockchains. For example: A hash function is a method of mapping an arbitrary volume of data to a fixed size volume of data. Typically it summarizes a large volume of data to a smaller volume. The same input will always give the same output and the input can be derived from the output. In a cryptographic hash, it’s easy to get to the output value from the input value, but if the input is unknown, it’s extremely difficult to find from the output value. Bitcoin mining involves solving a hash, made increasingly difficult over time so that despite greater resources always being brought to bear, a new block is successfully mined approximately only once every ten minutes.

Next up was a panel discussion of permissioned ledgers moderated by Jared Madfes, founder of Blockswan. The panelists included Levente Barczy of Digital Asset, George Calle of R3, and Eilon Shalev, CEO of Elphi.

Barczy led off with a definition of permissioned ledgers which are only open to those with permission. Public ledgers like those for Bitcoin are open to all. Calle gave a shoutout to Axoni, which he described as a very focused company. Its permissioned blockchain does not require proof of work, proof of stake, or currency. Shalev advised aspiring entrepreneurs in the audience to embrace regulation if they choose to so something in regulated industries. “Ask for advice beforehand rather than forgiveness afterwards.” Regulations such as GDPR and HIPAA require it.

Ending the day was Columbia Engineering professor Chong-Li who described his plans for blockchain-based distributed shared computing for high performance computing jobs. This boils down to accessing—and paying for the use of—computing devices around the world that their owners are not using for a period of time. This seemed to us to be somewhat similar to SETI shared computing in the search for extraterrestrial life, albeit hopefully with really good cybersecurity.

By this time, we had been sitting through around 11 straight hours of keynote speeches, panel discussions, and non-flammable fireside chats. Interesting though they were, in the words of Johnny Cash, it was time to leave and head outside to “breathe some air that ain’t been breathed before.”