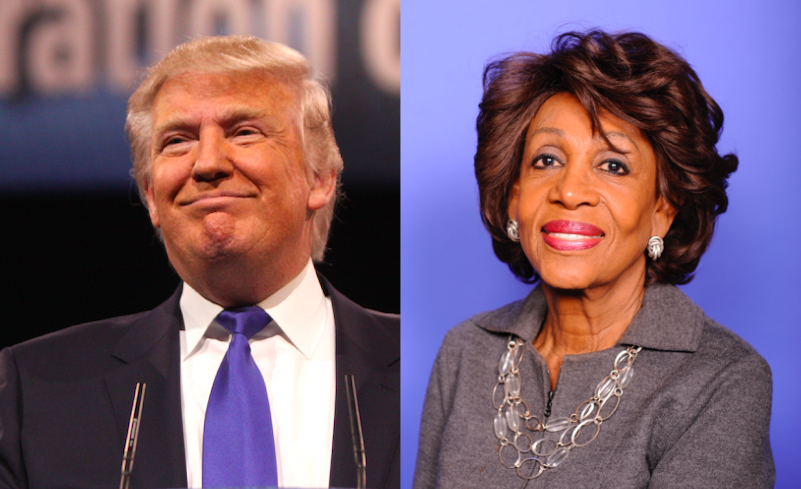 President Donald Trump and Rep. Maxine Waters (D-CA) agree on their dislike of the Facebook-backed Libra cryptocurrency (Photo composite from images by Gage Skidmore of Peoria, AZ, and the U.S. Congress)

Facebook is so powerful it can even make President Donald Trump agree with Rep. Maxine Waters, the liberal House Democrat from California’s 43rd district, near Los Angeles.

Calling the U.S. dollar the only “real currency in the USA,” Trump said the greenback is “stronger than ever, both dependable and reliable. It is by far the most dominant currency anywhere in the World, and it will always stay that way.”

He added that cryptocurrencies “can facilitate unlawful behavior, including drug trade and other illegal activity.”

But his real target was Facebook, which raised a chorus of disapproval and alarm from elected officials and regulators around the world when it announced it had put together a coalition to create a stablecoin—Libra—that could be used for financial transactions by the 2.7 billion people on Facebook and its WhatsApp messaging service.

This put Trump on the same page—for once—as Waters, who chairs the House Financial Services committee. Waters immediately slammed the Libra announcement on June 18, railing against Facebook for deceiving consumers and ignoring their privacy. She demanded that the company and Libra Association colleagues like Visa, PayPal, and Uber stop work on their cryptocurrency project until hearings can be held.

Federal Reserve Chairman Jerome Powell added his voice to that call in hearings Wednesday before Waters’ committee, arguing that “Libra raises many serious concerns regarding privacy, money laundering, consumer protection and financial stability.” Until those are addressed, he added, the project should not be allowed to go forward, he added.

Many other many politicians and central bankers from around the world have expressed similar concerns. Among the first was French Finance Minister Bruno Le Maire, who warned, “it is out of the question that [Libra] becomes a sovereign currency,” on June 18.

Unlike Waters and Powell, Trump was derisive, predicting “Facebook Libra’s ‘virtual currency’ will have little standing or dependability.”

He added that if the social media giant wants to start offering banking services, it “must seek a new Banking Charter and become subject to all Banking Regulations, just like other Banks, both National and International.”

Facebook has made fairly clear that it hopes to go beyond just payments. David Marcus, who leads Facebook’s new Calibra wallet division, told CNBC on June 18 that the company hopes to offer other bank financial services like consumer loans. “If the network is successful, it will be a big opportunity for us to provide lending to all these consumers,” said Marcus.

Cryptocurrency proponents, for their part, replied with the cryptoverse’s usual respect for authority. Bitcoin booster Jimmy Song tweeted, “Thankfully, Bitcoin doesn’t care what you think, even if you’re really powerful.”

Blockchain falling behind as digital ID users grow towards 5 billion

SEC doubles down, approving a second blockchain token offering in less than 24 hours
Tweets by ModernConsensus